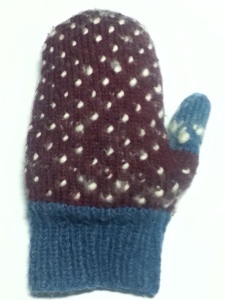 I hate doing thrums…I can’t say why but it is the only thing (besides sewing up) that I really hate to do in knitting.  The hatred is completely irrational but completely real.  Which proves how much I love my husband because I have made him not just one, but two pairs of thrummed mittens.  For those that don’t know, he is a rampant cyclist and he commutes an hour each way on his bicycle on all but a handful of days a year.  Unfortunately for him, he also suffers from Reyes syndrome (poor circulation in the hands).  This used to lead to his fingertips cracking in the winters.  It was painful and also meant months where he legitimately could not do any dishes (from a purely selfish viewpoint). ANYWAY…his first pair of thrummed mittens solved the problem, at least until, sadly, he lost one of them in a downtown meeting, never to be seen again. 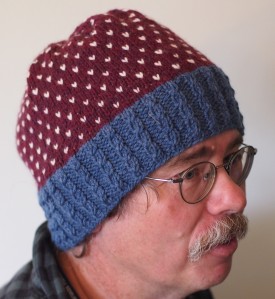 Alan in his ‘thrummed’ hat

So, feeling sorry for him and not looking forward to a winter of solo dish washing, I made him a pair of thrummed mittens for Christmas.  I liked the way they looked so I made a fake thrummed hat to go with them.  No fleece inside this baby.