So I have been doing some power touristing in Vienna. I bought a two day Vienna Pass which gets you the hop on/off bus plus numerous museums. Yesterday I visited:

The MAK museum of decorarive art and did two routes of the hop on/off bus.

I also went to the Votive church, which for some inexplicable reason has weird coloured lights on the alter section. 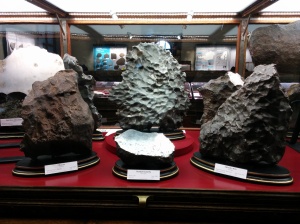 …and the museum of natural history which, amongst other things, has an extensive meteorite collection.

Today was even fuller, starting with a visit to the art history museum. As well as a fine collection of paintings, they have an exceptional collection of decorative objects, which left me awestruck by the craftmanship. 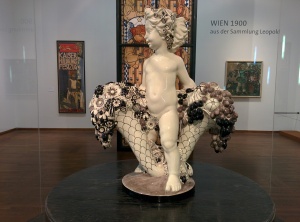 This was followed by a visit to the Leopold museum. After 5 solid hours of art galleries, I took the hop on bus.

…to the world heritage site. Schonbrunn Palace and gardens. This is a picture of the Belvedere, the picture at the top of the post is the actual palace, as seen from this building.The tour of the actual palace was impressive. So were the grounds. 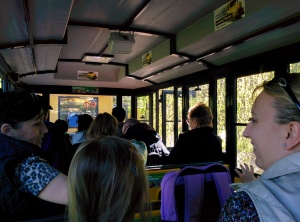 I was already dead tired at this point so I took the silly tourist train through the gardens. 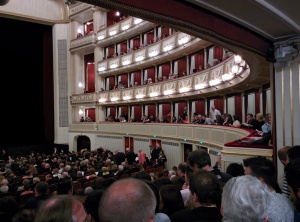 And if that wasn’t enough, I cued up for half an hour to buy a standing room ticket for the opera. I gave myself permission to leave before the end, fearing I might collapse if I didn’t.

I took a short walk in the train station area of Innsbruck before heading out. 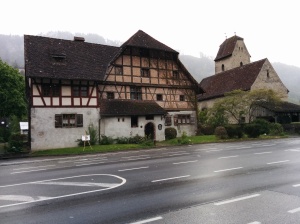 We got to Feldkirch, Austria yesterday and we are staying in the youth hostel. It is a building that was used as a leper/plague sanitorium in the late 1300’s. 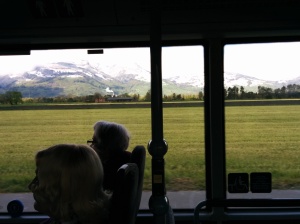 Today we bought a day ticket on the Lichtenstein bus service.

We overshot our stop and ended up going through and into Switzerland accidentally before turning round.

On the way back we stopped in Vaduz, Lichtenstein and walked around a bit. Lichtensten is lovely, full of mountain views, but it is quite built up and super expensive. We didn’t visit the castle you can see on the cliff above the building in the foreground. Charles is a bit castled out and I was happy enough not to bother myself.

Have I mentioned lately how much I love to travel?

Spending a day swiching from train to bus to train with easy connections. Hearing the announcer say ‘Kitzbuhel’ and realizing this is where they ski on tv.

Having a couple of hours to kill in a town that ends up being super pretty. 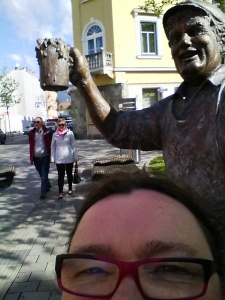 Rolling past mountains and lakes and rivers and streams. And ending up in Innsbruck with a half hour walk to the hostel, and seeing mountains through every break between buildings and breathing the famously crisp mountain air.

We came to Bled yesterday, separately. I went down to Postojna first. Charles came directly from Ljubljana. This morning. I woke up at dawn, so I went for a walk around the lake. I always try for at least one dawn per trip. It has taken me a month! I love how quiet it is, and the changing light.

Just me and the swans.

There is a castle (of course) on a hill overlooking the lake.

Charles and I went up this morning.

There is a nice view down to the lake. 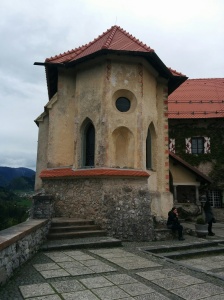 It has a nice little chapel.

On my way back to the hostel, I stopped at the Supermarket. It looks nothing like Loblaws.

Yesterday we went to Skocjan cave, Slovenia, another world heritage site. It is a huge cavern, well over 100 meters high in places, very majestic. It has the river running through the bottom of the gorge. They take themselves very seriously and there is no photography allowed inside the cave. This picture was taken looking at the mouth of the cave from outside.

Today I went to a whole different kind of cave experience, Postojna Jama (cave). It has a train running through the first two kilometers, then a 1.7 km walk, and back on the train. 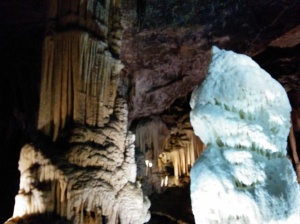 It has pretty over the top decoration and if you didn’t know it was real, you wouldn’t believe it. 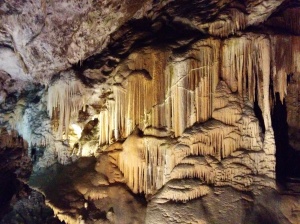 Everywhere you look are stalactites, stalagmites, pillars and curtains.

I have been to a lot of caves in a lot of places and this ine was right up there.

I was taken with a similar picture to this in my guidebook so went to Ljubljana Castle today to see it for myself. 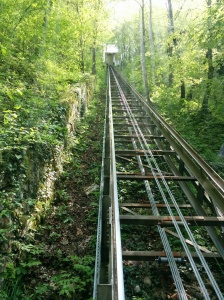 Of course I sprung the extra $3 for the funicular ride up and down.

The center of Ljubljana is full of pretty buildings covered in fiddly bits.

The light wasn’t good but I loved this one that was decaying a bit and had flowering bourganvilla (sp?) growing up the front. 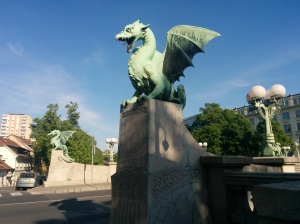 The symbol of the city is the dragon, seen here on one of the bridges across the river.

I could have shown pictures of tons of buildings as nice as this–gotta love Europe! 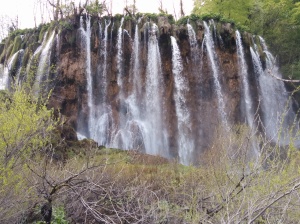 We spent 5 hours on the bus and 5 hours at the World Heritage site park. It was a lovely day. Perfectly doable and easy. The bus from Zagreb lets you off and picks you up at the park gates with plenty if time to see everything.

We walked to the boat launch (boat ride included in $22 cdn entry fee). Ten minute boatride across the bottom lake.

The park is a series of lakes connected by falling water.

There is this fabulous series of board walks which lead you up and around the lakes and on top of cascades if water.

There is falling water everywhere and the sound of it is deafening at times.

The roar disappears into silence as you walk around the lakes.

There were way more people than I like to deal with near the bottom, but it wasn’t too bad on the walk up. I bet it is a zoo in the summer.

There was a free bus to take you back down. We actually finished what was supposed to take 4-6 hours in three, then sat around waiting for the bus back to town.

We got to Zagreb after a seven hour bus ride late yesterday afternoon. 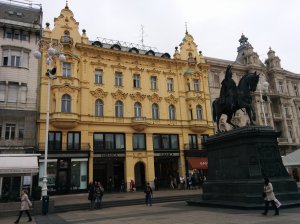 Today we took the self guided walking tour of the upper town.

Here I am outside St. Mark’s cathedral.

We had climbed up the hill and at one point were rewarded with a lovely view of the lower town.

I couldn’t resist taking a ride up and down on the shortest funicular in the world.

And I made my trip to foriegn McDonalds. This time it was roasted baby potatoes as the local entry. 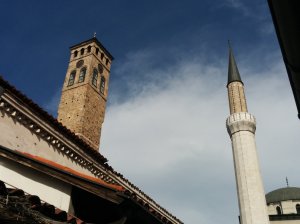 Twin towers. The 16th century mosque minaret and the clock tower which shows dusk as midnight.

Sarajevo was under seige from 92-95. This is the city hall where the university library was. A plaque on the front says 2 million books were burned by the serbs in 92.

We have been wandering around for a couple if days. Yesterday we went to the war museum. 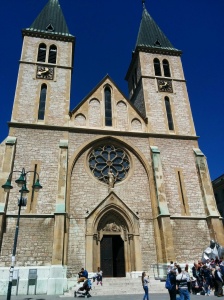 This is the Catholic cathedral outside. 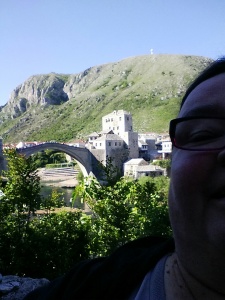 This is Stari Most, the Old Bridge of Mostar. It was destroyed in the Bosnian war, then subsequently rebuilt.

Mostar has a nice old section and as we wandered round, the (ex) quilter in me was captivated by the patterns in the cobblestones.

I have seen this sort of thing before, but there is always a slightly different take. 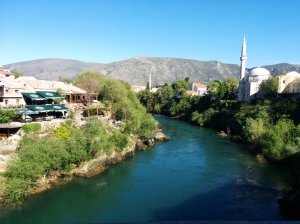 There was a nice view off the bridge. 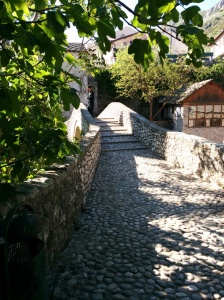 After our walk we got on a bus for Sarajevo. We are cooling our heels for three nights here, at Charles’s request.