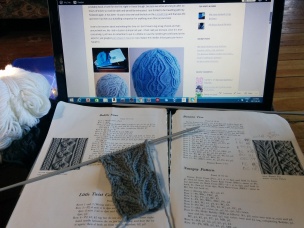 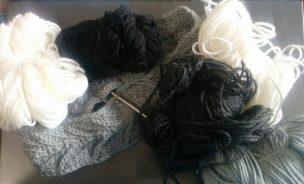 deciding on colours…white did not make the final cut…

closing up the top

…any model will do in a pinch

finished product
My sister Philippa has always been one of my biggest supporters. She is 18 months younger than me, but has been more mature since we were very young. When I was in pottery school, she used to buy my bowls so I could have a bit of spending money. She was a faithful reader of my early travel blogs, and may be the only person except Alan who has read every post of this blog. Penny, if you have too, I apologise in advance. Her request was a hat in shades of grey to match her new coat.

I did the light grey band first on straight needles, then picked up off both edges. I am still in the cable chapter, so my new standard is 120 stitches. I had 14 repeats of the Banana Tree, pg 269, so on the bottom edge of the banana tree band, I alternated between picking up 8, then 9 stitches per repeat to get to my 120. I did one repeat of the Wave of Honey Cable or Little Chain, pg 252, then started doing short rows so that I ended up with 3 repeats at the front and only one at the back. I then did 4 rows of garter stitch in black and cast off loosely. I decreased to 100 stitches for the garter stitch by knitting the purls between the cables together. This served two purposes. It decreased down to the 100 stitches needed for the plain knitting to have a similar tension as 120 stitches of cabling, and it bound the transitions of the short rows together to cinch the gaps. 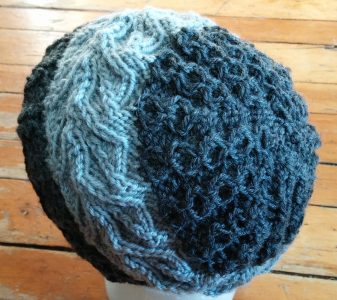 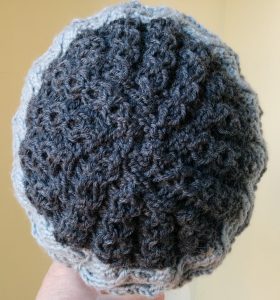 For the top edge of the light grey band, I only picked up 7 stitches per repeat ..98 stitches which I then reduced to 96 in my first pattern row (16 x 6). I did twice through the little chain cable, before getting rid of every fourth, then every third and then every other cable. To get rid of a cable, I purled the first and last of the four knit stitches of the cable, and did a slip 1, k1, psso on the middle two, so I had 3 purls, one knit and 3 purls. Next row, I did p2tog, p1, p1 on top of the cable, p1, p2tog, bringing it down to 5 purls. Next row p2tog, p1, p2tog, down to 3 purls, then on the next row p2tog, p1. This way you get rid of one 6 stitch repeat over 4 rows. Looking at the finished picture, I think it may have been better to use the light grey to pick up the stitches, then switch to the dark grey after the pick up row. It does not really look messy in real life though, the camera accentuates the transition because of the difference in value of the two shades.

As far as the travel plans go…we are at the gathering crap in a basket stage.