I am not in the least averse to ripping out knitting if it is not working. In fact many hats I have done have had way more stitches ripped out than exist in the finished product. If you are not starting with a pretested pattern, things sometimes just don’t pan out. I sometimes have a few false starts before I knit to the finish. I have a philosophy that we are supposed to be knitting for pleasure, therefore the act of knitting itself should be pleasurable, right? Following this to its logical conclusion means that it shouldn’t bother us to rip out
knitting and start again if things are not going well. Even though this technically should be the case, I think sometimes we tend to be goal oriented and finishing the project becomes too important. We start to think about the time investment, etc..

The nice thing about hats is you have almost never wasted more than a few hours of work.  I have found over the years that if things look like they are not working out, doggedly knitting more of the same almost never improves things. Sometimes, however, you get to the very end before it becomes apparent how badly you have gone wrong.  Consider this hat. This is an example of when, what seems (to me anyway) to be a series of perfectly rational design choices, ends up going horribly wrong. 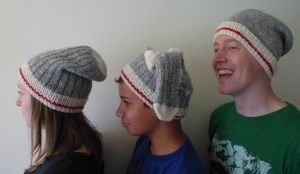 I was working on a series of work sock based hats (I know, I know it’s been done anyway but my husband Alan wears worksocks every day and I like the colour scheme). ANYWAY, I thought why not end at the top of the hat with an actual sock? Then, because the top of the hat is much bigger around than an actual sock, I thought why not have three heels around and do each one with a different heel turning method making it like a heel turning sampler, then finish with the foot of a sock so that the common foot part is shared by each of the three turned heels?

It wasn’t until I put the ‘toe’ on the sock that the reality of my mistake bit. Unfortunately, no matter how you look at the sock, the foot part seems to always have two very obvious heel parts at the base. And the foot almost always flops. I keep it as a joke, because there was no point in ripping it out at the very end. When my 13 year old nephew Jay (wearing the hat in the picture) put on the hat he said ‘and which side would you like me to wear the ….. on?’.  When Heather first saw it she thought it looked like someone giving you the finger…equally inappropriate, but in a totally different way. 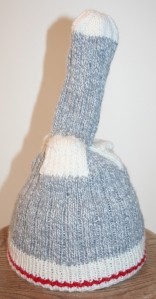 Oh well, back to the drawing board…good thing I enjoy the design process, sometimes right until the bitter end.

Why knit plain when a pattern stitch will do? 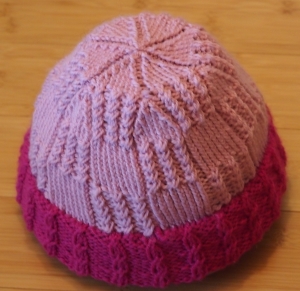 A Treasury of Knitting Patterns,  pg 117

(slightly modified from) A 2nd Treasury of Knitting Patterns, pg 138

This is the first of a few posts I plan to write about the women who have influenced me most as a knitter,  I think first and foremost it would have to be Barbara G. Walker.  For those of you who are unfamiliar with her she wrote, among other things, the 1st, 2nd, 3rd and 4th Treasuries of Knitting Patterns.  All these books are (deservedly)  still in print even though the first treasury was originally published in 1968.  I bought my first copy of A Treasury of Knitting Patterns back in the 70’s.  It is now in two pieces and quite dogeared.  Even though it is thankfully made with sewn signatures, so will not drift apart page by page, I have purchased a pristine backup copy that stays on the bookshelf JUST IN CASE.   I rarely start a hat without opening at least one of her books, and when nothing is coming to me, I browse through her books and find a pattern stitch to jump off from.  I long ago gave up tagging designs to use in the future…I always had too many bits of paper in the books, and when I went to the page I couldn’t decide which of the stitches the tag was for anyway…

The 3rd treasury is also called Charted Knitting Designs. If you are an avid knitter, even if you are not familiar with the book, you are familiar with her concept of charted designs. The great thing for me about using this book, when I do, is that I don’t have to chart out the designs myself.  When I use the 1st and 2nd treasuries, I always have to translate either into charting or in my head so that I can knit the pattern stitch in the round.  The instructions in the first two treasuries are for knitting back and forth on straight needles.

I am sure it will take me the rest of my life to plumb the depths of these books.  Thank you Ms. Walker for writing them.