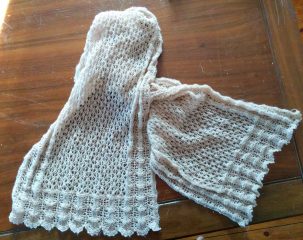 not going to block it 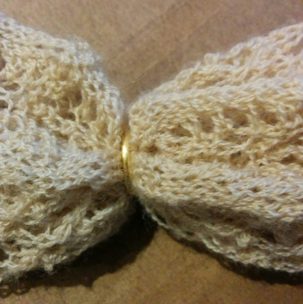 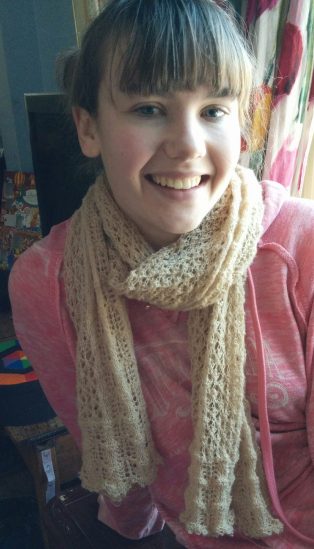 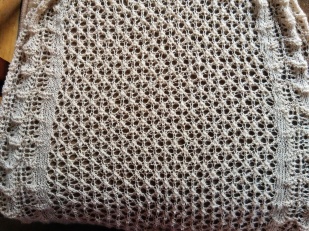 If I were to block it 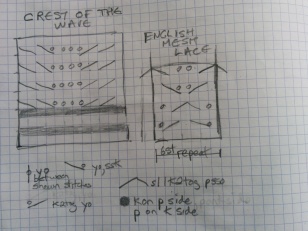 In case you don;t own a copy….
60,000 stitches, 75 grams/1050 meters of lace weight yarn, 3 weeks of relatively concerted effort… probably 100 hours of knitting. I am in the lace chapter aka knit forever chapter. I was so scared of this chapter that I did not knit at all for over 6 months between the shiny scarf and this one. For all this effort… two, count em… two and only two stitches. I have decided to start showing pictures of the stitches graphed out for people who don’t own the book. I have to do it anyway if the stitches are on different pages so I don’t have to flip back and forth. With the hats I mostly did one stitch on the brim and one or two on the body of the hat, so I didn’t bother graphing unless it was complicated. 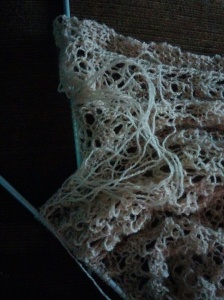 Oh what a tangled mess we weave

Oh, well, at least it makes a nice scarf at the end. But make a mistake and it will set you back hours and hours. My knitting looked like this several times. To fix a mistake you cannot live with, first you have to pull back each row until you get below the mistake. My first time, I took it off the needles. Mistakeyboo…It took forever to put it back on and by the time I did I had lost a whole day or more of knitting. I found that taking just one whole repeat of the pattern back was the best. This way you had all the stitches that were involved with each other, and it was easy to tell where you were. You knit back up, one row at a time, being careful to take the bottom thread each time and hooking it over your finger, European style to knit back up. Tension can be an issue if you are not careful, so I became careful. It is not all that bad once you get the hang of it. I was down to an hour or so to fix this kind of mistake by the end of the shawl.

I say shawl because it would be a shawl if I blocked it. I actually finished it a couple of weeks ago and hemmed and hawed about blocking it, which is why I am only posting it now. I have decided not to block it at least for now. I love the liveliness of it. Blocking would show the stitches more but it would flatten the life out of it. It is made with Austermann Merino Lace yarn which is supposedly superwash. It is soft and bouncy, light and warm. I am not sure how much finer a yarn they would knit with in Shetland, but even this scared me at first because seemed that a bit of a tug and it could break. I got better by the end. I had to. It was that or quit, and I cannot quit. I share an obsessive personality with my late father and most of my siblings. I rarely give up on anything. Which is why this week I passed level 3000 on candy crush. I am not sure if I should be proud of this or ashamed at how much time I waste on it… 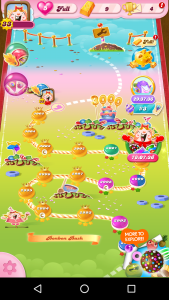