good news…I got my knitting with me at least to London…it came all the way to Kolkata through three airport screenings…yeah! Good to know.

a couple of interesting things happened…here is my second plane on the Tarmac:

I had a kharmic experience on this plane.  For those that know me well, you know that claustrophobia can be an issue for me which is why I need an aisle seat unless I know my seatmates.  Someone asked me to switch seats with him but it meant being in the window seat of a 3 people row for an 8 hour flight, so I said no.  I need to walk around at least once an hour and I never would have had the guts to ask.  Anyway, the seat I clung onto had a busted touchscreen so I had to do without the movies for the whole time…bummer…this is what I saw the whole time: 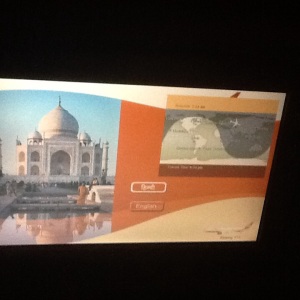 We left London at 1 pm and the flight lasted until 9 pm London time.  The flight crew decided to turn off all the lights in what would be mid afternoon for the lions share of the passengers and go on a couple of hour break leaving a serve yourself galley which I have never seen before.  It was hard to get a good picture because so many people were helping themselves…

Arriving in Delhi reminded me what India was about.  I had a run in with a green form which sent me all over the place trying to find one only to learn I didn’t need one anyway.  The airport also smelled like a campfire and had a visible haze inside near the departure gates.  This would have been alarming to me in any other country, but I took it in stride here.

Kolkata has visible ground smog and it will be a miracle if I don’t have to fire up the puffers very soon.

Also,.. note to self,… Indians don’t make very good hot and sour soup.  I know this because I had a restaurant recommended by the hotel staff which turned out to only have western food (I include chinese food in this because it had the standard chinese fare).  I couldn’t find anything to order so I tried it, to my cost.

1 thought on “In the departure lounge…”