I went on an all day bus tour of the sacred valley around Cusco.  Phil was of course supposed to come but she had wicked altitude sickness. She only got up once that day to go get pills apparently.  We had already booked the tour so she said I should go anyway .

There was chaos at the start as the scores of your operators from around the city brought their customers and tried to install them on the buses.  I was put on one bus then taken off it because it was a Spanish only tour, only to be put on another Spanish only bus.

It turns out that the last English bus had left in the meantime so I was promised that I could switch at the first site Pisaq.  Before we got there, however we had to stop at the first of three souvenir stops.

Pisaq had 4000 inhabitants in Inca times, 2000 of them farmers on the terraces.  The terraces had stone walls in front and were backfilled with gravel and topsoil. I was introduced to the English speaking guide and promised that I would be switched after the next site.  We then went for a buffet lunch.

We carried on to the next site, Ollentaytambo.  It was quite a zoo of tourists. None of my pics were all that great. 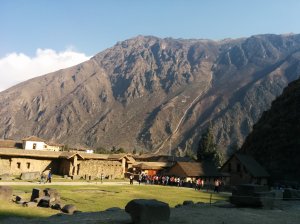 After this place they finally offered to let me switch buses, but I was understanding a lot of what he said and that were a very jovial group so I stayed with them.

The final stop was at a textile place where they did a demo about dyes and had another nice display of dyestuffs. 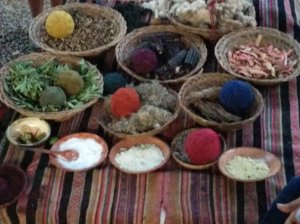 I got back to the hotel 12 hours after leaving and Phil’s meds were kicking in enough to go out for ice cream.