We arrived back on the bus-from-hell, oops, I mean the bus from Cusco to Lima just before noon on Saturday. We had 11 hours to kill before we were supposed to be at the airport, but we were encumbered by luggage.  We took a taxi to the Museo de la Nacion, again, which should have been open, again, but it was strike two. We took another taxi back to the bus station (only $4 poorer) and got on WiFi to try to find a restaurant.  Phil found one that we probably should have been able to walk to but, unsure of how to get there exactly, we took yet another taxi.  It turned out to be a huge local favourite and was jam packed with people in a huge sprawling restaurant with an upstairs as well as two huge rooms downstairs and live entertainment.   We had another excellent meal.  Those foodies knew a thing or two when they decided to make Peruvian food the next big thing.  In the picture that’s lamb, tacu tacu, fried plantains with quail eggs and some Lima type beans with corn kernels. 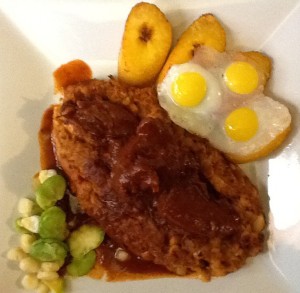 We walked back to the bus station and Phil negotiated a deal with a taxi driver to go round the city for 8 hours and be driven to the airport for $60. He had a taxi licence so he fobbed us off on his brother around the corner who took us in his own private car.   I wracked my brains to remember the things that were left on the list I made of things to do in Lima, but had subsequently lost.  I knew that the Bridge of Sighs (Puenta des Suspiros) was on it and we wanted to go the the seaside.  It turns out that this was a two birds/one stone situation and we walked down to the ocean from there, where Phil collected sand for a friend.

I then suddenly remembered that we had been meaning to go to the Huaca Pucllana ruins, near where our hotel had been.  Although I couldn’t for the life of me remember the name, I managed to communicate this to the driver, whose English was unfortunately as limited as my Spanish.  Off we went, arriving not long before the last English tour of the day left.  They don’t let people on the site without a guide.  It was another good choice.

When we were back in the car, Phil noted that when the taxi driver was not trying to get us to the destination as quickly as possible on his own time, we saw a much nicer city than we had in the few days we had been there at the beginning of the trip.  This driver knew we had lots of time and took us along much prettier streets than we had ever seen before.  The last thing I remembered from the list was the Parque de la Reserva, which has a bunch of water fountains.  I knew that it said to go there at night and we got there just before sunset so we saw it in both the light and dark,

It was a great place to walk around because some of the fountains were splash pads and there were lots of kids having a blast.  At this point my memory was tapped out so we asked to be taken to the Plaza das Armes to see it in the dark.  When we got there, the traffic was terrible and there was no place to park so we just took the driver for ice cream and headed for the airport.  This trip has taught me that I am a guidebook person and i will go back to my always having a guidebook with me roots from now on.