Even with the hiccups at the beginning of the trip, we are more than making progress. This morning we woke up in Pristina, Kosovo, yesterday morning it was Belgrade, Serbia and now we are in Skopje, Macedonia. Granted, they all used to be in Yugoslavia. I think I have convinced Charles to spend at least three nights in Macedonia before heading to Greece. This morning we took a walk before leaving Pristina. 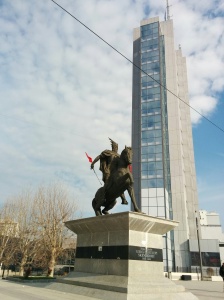 This is the monument symbolizing the new nation after the war

the national library…wierd and wonderful building

and surely no visit to Pristina would be complete without visiting the Bill Clinton statue on his boulevard, just off George Bush Boulevard.

4 thoughts on “Setting a gruelling pace”