…made it to work! 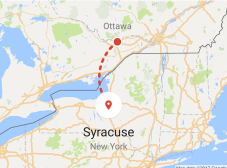 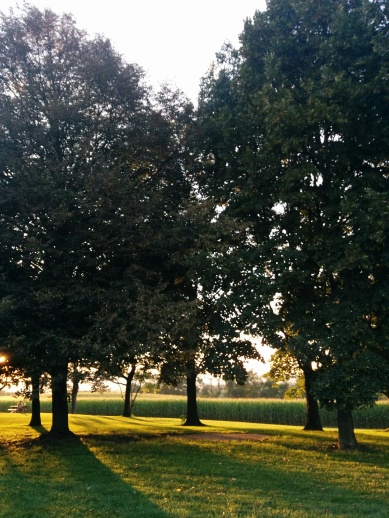 low light at the rest stop

driving into the sunset

bought a road atlas at Crackerbarrel

time to book it home

a patch of rain

through the night….all night
My brother Charles got wind of the fact that I had Sunday and Monday off work. Just enough time to drive to the eclipse in Sweetwater Tennessee and back. He really wanted to go, and total eclipse was on my bucket list. It took me three asks to persuade Alan to come with us, but he caved. We checked the weather forecast on Sunday morning to make sure we weren’t heading for total cloud cover and headed off from Ottawa at about 10.30. We picked up Charles and left Mum’s by about noon.
Mum had packed us sandwiches and bananas so we didn’t need food until suppertime. Of course we stopped at a Crackerbarrel once it went dark. Charles had never been so we got a new convert. I picked up a road atlas in the gift shop because we had only managed to find maps of NY and PA before we left. Not that it was hard up to that point…cross the bridge and stay on the I-81. We got back in the car and drove till midnight when we stopped at a Motel 6. we were back on the road by 6 and stopped for breakfast at 8 at a McDonalds for the wifi. This was critical because we had to decide at this point if we were heading to South Carolina or Tennessee. The weather forecast looked much better for Tennessee, so back in the car and south we went.
Knoxville gave us pause and at one point I thought we were going to spend the eclipse in a giant traffic jam just north of the totality zone. How depressing would that have been? We did eventually crawl through Knoxville and on to Sweetwater. We pulled into the last space in the parking lot of a Burger King with an hour to spare and the moon already starting to cross the sun. It turned out to be a perfect location. We bought lunch from a very harried staff and sat down to watch eclipse coverage on CNN. Every few minutes or so we went to check the moons progress with our eclipse glasses left over from our Transit of Venus viewing in 2012. We left the restaurant for good about 20 minutes before totality and joined the legions of peaple with their lawn chairs in the parking lot.
Totality only lasted 2 1/2 minutes but I can say that it was worth driving 3000 km for. The crowd cheered, the crickets started chirping up a storm and the sun looked like the pictures (the ones taken with real cameras…not mine taken from my phone!). Someone let off fireworks a few hundred meters to the north west. I am not sure it was a good use of their totality watching time, but their choice I guess. The diamond ring effect happened, I got the men into the car and we booked it home. We only stopped for gas and subway sandwiches which we ate on the road. We got back to Mum’s in time for me to have a shower and head straight to work.
Road trips…gotta love em/