My first night is over.  It turned out ok after a while.  I had had a nap in the afternoon and the brand new filter on my apnea machine looked black instead of the pristine white it had been mere hours before.  I went to bed early and all started fine, then I felt an asthma attack starting.  I was in a dilemma, being sure the trigger was coming through the cpap machine.  If I take the puffer, it keeps me awake, so I decided to go without the breathing machine… I woke each hour for a while and finally decided to chance the machine again…luckily whatever it was had dissipated and I slept ok for the rest of the night until about 4 am when I was awakened by a very musical call to prayer.

India is a real assault on the senses.  The street noise is deafening.  Luckily my trusty lap pack still had a lot of goodies in it, including a pair of earplugs..hurrah.  Just waiting for the museum to open.  Will post again later.

good news…I got my knitting with me at least to London…it came all the way to Kolkata through three airport screenings…yeah! Good to know.

a couple of interesting things happened…here is my second plane on the Tarmac:

I had a kharmic experience on this plane.  For those that know me well, you know that claustrophobia can be an issue for me which is why I need an aisle seat unless I know my seatmates.  Someone asked me to switch seats with him but it meant being in the window seat of a 3 people row for an 8 hour flight, so I said no.  I need to walk around at least once an hour and I never would have had the guts to ask.  Anyway, the seat I clung onto had a busted touchscreen so I had to do without the movies for the whole time…bummer…this is what I saw the whole time:

We left London at 1 pm and the flight lasted until 9 pm London time.  The flight crew decided to turn off all the lights in what would be mid afternoon for the lions share of the passengers and go on a couple of hour break leaving a serve yourself galley which I have never seen before.  It was hard to get a good picture because so many people were helping themselves… 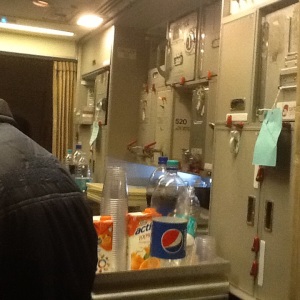 Arriving in Delhi reminded me what India was about.  I had a run in with a green form which sent me all over the place trying to find one only to learn I didn’t need one anyway.  The airport also smelled like a campfire and had a visible haze inside near the departure gates.  This would have been alarming to me in any other country, but I took it in stride here.

Kolkata has visible ground smog and it will be a miracle if I don’t have to fire up the puffers very soon.

Also,.. note to self,… Indians don’t make very good hot and sour soup.  I know this because I had a restaurant recommended by the hotel staff which turned out to only have western food (I include chinese food in this because it had the standard chinese fare).  I couldn’t find anything to order so I tried it, to my cost.

Hello one and all … it has been 6 months since I posted…I was working…what can I say…although that excuse wears thin a couple of months ago…so be it.

I am sick of starting new blogs when I travel so I am just going to stick you people with my travel stuff too.  There aren’t that many of you anyway.  I am leaving tomorrow for India and Bhutan (aka the happiest place on earth).  I have been to India, but never Kolkata, twice before (25 years ago on Alan and my year long 1/2 bike trip…India killed the bike part) and 8 years ago with the kids on the six month trip documented on:

This time I will spend a couple of days alone in Kolkata then be joined by my sister Felicity’s son, David, My sister Penny’s daughter, Laura, My sister Nicola’s husband, Surya and my sister Melanie’s husband, Pat for the Bhutan part of the trip.  I have already familiarized myself somewhat with the GKA, even though I am not actually on a plane yet.  This is for two reasons…1) we gave our Lonely Planet, India to street urchins in Bangkok so they could make money re-selling it and I don’t want to pay another $42 for a 2-inch book only a few pages of which are relavent.  and 2) did I mention I would be alone?

I have been getting ready for the trip by exercising.  I have been walking with friends and attending aquafitness classes.  I have discovered a pool where three times a week it is possible to go to 4 aquafitness classes in a row, thus getting 3 hours of exercise.  This has helped me build my stamina so I can do the walking around (with my pack if neccessary).

I did make a hat last week on the new years party hat theme..it is felted three times through the washer and dryer.  I am thinking of inserting an ear covering armature for cold nights and adding some decorative bits…

..Alan insisted that the cat may become an internet phenomenon if only she got exposure…