Heather asked for a Space Invaders hat that was rude inside and reversible.  At first I couldn’t wrap my head around doing these together, because I was stuck on the idea of the phalanx of space invaders one sees in the game. I thought I would have to split it into two hats for her, one with space invaders and one that was rude inside, so I figured out the pixelation that would fit on a hat and went with that.  I was unhappy with the middle set of invaders, they looked ok in my drawing but didn’t knit up well.  I thought the bottom and top ones looked close enough to the real thing for anyone who had played the game, but not the middle ones.  Back to the drawing board (or graph paper notepad in this case) I went and came up with better (more detailed) pixelations.

There are two distinct phalanxes, because each of the guys waves their arms and switches between two modes, so on the second hat I did each of the guys in each of their modes, plus the bonus spaceship.  You can see six of the seven invaders in the above two shots.  Below see Heather sporting her new hat…and her new tattoo peeking out from her shirt.

….and I made it rude inside as per her request… as my friend Jen said when she saw it in progress…it is totally NSFW on the inside. 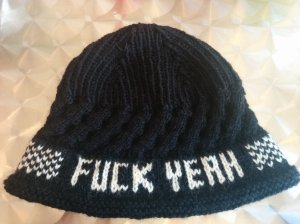 Oh yeah…and for the Barbara Walker project,  I used Diagonal Wave, pg 275, above the fold, because it is the same on both sides.

3 thoughts on “A game of Space Invaders anyone? How about you, Barbara?”