I had a couple of job interviews this week.  I had to compete for my job in the cooking unit, so I am now officially a cook at Upper Canada Village..yeah!!  I was on temporary assignment last summer.  I also had an interview for a job that would be a “shoot me now” kind of deal.  Four months answering emails from the public about how to fill out their census forms.  I am really glad they have reinstated the census, but.

I bought three balls of Cascade 220 and used them to make these three hats.  I used a different colour for the lower part of each hat, then used my last three patterns that use three colours.  I had to skip ahead a few stitches for the white hat to find an appropriate stitch.  I did the blue one first.  I made the bottom in a long band on two needles using Tyrolean Medallion, pg 246, then sewed the ends together and picked up and knit the body of the hat using Three-Color Basket Tweed, pg 76.

Because of the bold blue lines, I was able to make a decent shot at the top.

This one I knit straight up from the bottom edge using Dotted Chevron, pg. 28, then Motley Check, pg.76. 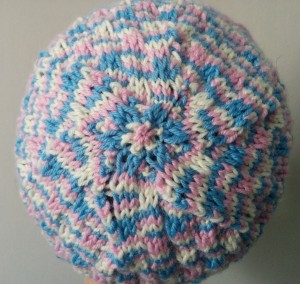 The top on this one turned out so-so.

I did this one last and again went straight up from the bottom edge using Medallion Cable, pg.246 and finishing with Triple L Tweed, pg. 81. 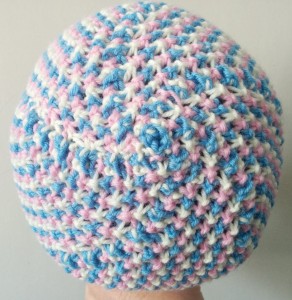 The top on this one is a bit of a dead loss, you can vaguely see the spiral arms of the decrease coming in but it is lost in the pattern mostly.

I had actually used two of these patterns before, way back in November, 2013 when I was doing Teletubby Puke colours.