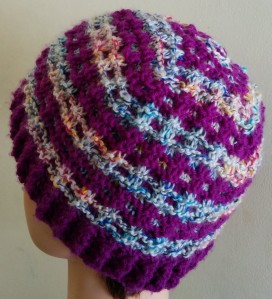 Heather was home for reading week and I was bemoaning the fact that I thought the blog was much less interesting when I didn’t have her around to critique my hats.  I usually just have her father these days and the criticism I get from him runs to “ooh, I like that one” or ‘that’s terrific”.  He doesn’t like to offer opinion on colour or style.  In fairness, he did offer an opinion for the valentines hat, then I phoned my friend Rosemary and sent her a picture.  He got overruled.  Heather is much freer with her opinions, like the pink from the triple threat hats the other day, “it kind of makes me feel sick– like I ate too much cotton candy”.  Don’t hold back honey, tell me what you really think.  I did get an “I really like that hat” from her when the hat above was finished, so, yeah me. 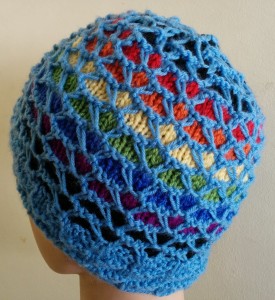 Sometimes I have to sell her on a concept.  Take this rainbow for instance.  I have always been a rainbow person.  I just love the pure colours and how nice it is to see one in real life.  We were in the wool store and she told me that rainbows were for children’s hats and I don’t do many children’s hats.  I don’t have any related children nearby, so I don’t have models.  Later, in the car, I said her cousin Ben had actually asked for the last rainbow hat I did, and he is ostensibly an adult.  At least the law school was willing to give him a degree and all.  She capitulated and I went back and bought the yarn.  This hat was pretty much a blast from my past.  Here is the sweater I was knitting when I was in labour with Jacob, 21 years ago.  (the rainbow was my idea…the pattern called for two colours in total) 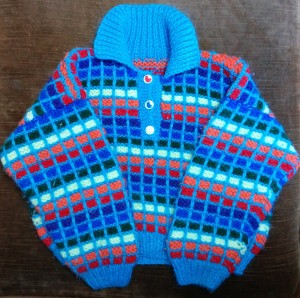 Needless to say the day he was born, many inches were ripped out and re-knit.  Also,when I was a field biologist in Algonquin park, we mapped the territories of White Throated Sparrows.  One of our biggest singers was banded with light blue over black colour bands, so I was thinking of this while I knit the black parts.. 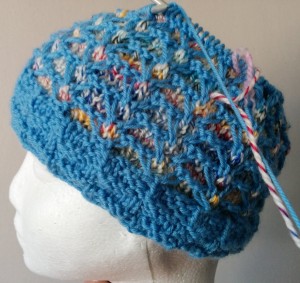 This hat had totally not been working out.  I was at one of my local wool shops, Wool-Tyme a while ago and got a ball of Cascade Bentley from their discount bin.  I tried to do the hat with the Bentley in the background but I lost both the pattern and the pretty yarn.  I ripped this back and did the rainbow on this one and used the Bentley in the other hat.

STITCHES USED/DECREASE STRATEGY:  Blue/Rainbow …100 stitches of Lozenge Pattern, pg 29 then increased to 112 stitches (16 repeats) for the Gull Check, pg 78.  Decreasing four points of decrease.  Every fourth 7 stitch repeat was decreased completely to nothing over one 6 row repeat, then I moved on repeat to the right and decreased another 4 twice to 28 stitches and winged the final decrease.

Purple/Bentley 99 stitches of Puff Rib, pg47.  This is a VERY loose rib and could have been done on fewer stitches.  It is not bad but quite loose.  Increased to 116 for the Linked Stripe Pattern, pg. 79.  Used 5 points of decrease and did (slip one, knit 2 together, psso) stacked above each other, every fourth row then every second row nearer the top.  In one place I had to not do the first two decreases because I only had 19 repeats, not 20 to start.. 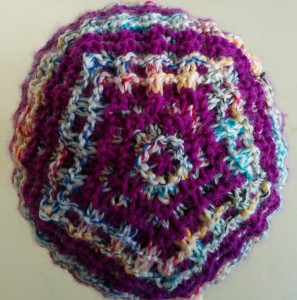 4 thoughts on “Sometimes you just have to reboot the hat, Barbara”