The urge to felt seems to have somewhat abated for awhile….

Did I mention that I bought 4 balls of eyelash yarn just before I started the blog? (and you thought it was only 3 and you were done hearing about the them with the demise of the elegant fireworks…).  Not so lucky you…   Anyway…this is the only hat I came up with for the fourth ball.  The rest of the ball will languish with the other part balls of novelty yarn that are left over from the only hats I have made out of Them…..

I called this post Perestroika because whenever she wears it, Heather reminds me of someone from a Russian novel.  I figure this hat is actually successful because Heather chooses to wear it all the time.  I have seen her wear it at least a dozen times to school…you know,,,that place she goes most days that is chock full of her peers…she did however decline to pose for the picture as you can see from the ‘model’.

I have FINALLY finished the three balls of eyelash yarn.  This will be the last hat in the series.  The concept is that it is f…g cold for outdoor activities on New Years Eve.  This would provide a warm alternative to the traditional party hat.  I am working on another of these party hats,  which I will post before New Years.

For this hat, I knitted the eyelash yarn first with the same wavy stitch I used for the frilly hat with lots of colours.  I knitted one repeat with orange, then blue, red, blue and orange.  I then joined the white Patons Classic Wool and increased the number of stitches by 50% (from 90 to 135).  I reversed the direction of the knitting as I joined in the white then knit up in behind until I had about one and a half times as much length in the white as I had in the eyelash.  I then joined the cast on edge in from the front (I went through the cast on eyelash stitch, then the white in behind).  I picked up two eyelash stitches for every three white.

I knit the rest in white.  I decreased 10 stitches every 7 rows until I had 50 stitches, then 5 stitches every three rows until I had only a few stitches left, then I pulled my yarn through.  I put the whole thing through the washer and dryer.  It wasn’t felted enough so I put it through the washer again and let it air dry.  I made the topper with a combination of knitting and crochet.

once through the washer and dryer

through the washer again 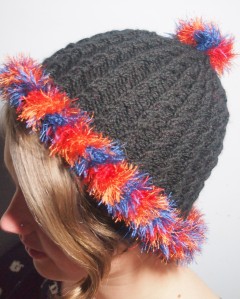 This, the 3rd edition of the elegant fireworks series. (see the first and second) (and I STILL haven’t finished the balls of eyelash yarn!).  This one uses i-cord to make a rope effect around the bottom and top.

I knit the basic hat casting on 104 stitches and doing a k2, p2 with a fake cable every 4th row (k2tog then knit first stitch again on each of the k2’s).  I stopped when I had decreased to 18 stitches to make the top

To make the i-cord rope along the cast on edge, I used the eyelash yarn and with the first colour, I picked up and knit into the first 3 stitches along the cast on edge, then used them to make a 3 stitch i-cord for 12 rows.  I reduced to one stitch with a  slip one, k2tog psso. I left this while I worked with the other two colours.  I used the next 3 cast on stitches to make an i-cord with the second colour, then reduced to one stitch and left it too.  I used only 2 stitches from the cast on edge and picked a stitch up between them for the third colour and made a third 12 row i-cord 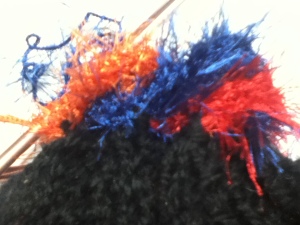 I then took the first i-cord and brought it in front of the other two and picked up into the next two cast on stitches and made a new I-cord.  I then brought the second colour over and in front and picked up two stitches…I continued until I had gone around and joined into the beginning,

For the top, I did the same technique, using live stitches instead of picking up from the cast on edge.  For the first i-cord of each colour, i used two live stitches and picked up a third between them. 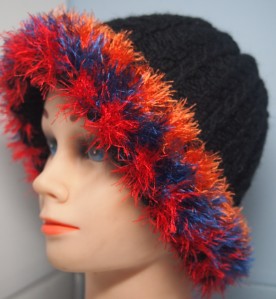 This is the second of at least three hats I will make with the three eyelash balls of yarn.  The first one  can be seen in my first Elegant Fireworks post.

Entrelac often involves very short rows.  On this hat the rows were only four stitches long. This would involve turning your work every 4 stitches all around the brim…  I knew I couldn’t both put off figuring out backwards knitting AND keep my sanity if I was going to do this.  I looked it up in A Gathering of Lace and on Youtube, then I forced myself to do it.  Backwards knitting  will be good to know for turning heels too.

finish stitch by pulling loop forward and off

To knit backwards, you put the left needle into the back of the stitch on your right hand needle, then wrap your yarn from top to bottom and knit it off.  I have it down pat now, and I am pretty sure it will be in my wheelhouse from now on.

One thing I learned is that you have to hold the yarn in your right hand, or else it is impossible to make the stitch correctly.  You have to wrap the yarn from top to bottom, and this can’t be done with the left hand at this angle.  If right handed yarn holding is not in the cards, it is not actually such a big deal, you just have to knit into the back to turn your stitches as you knit them forwards again.